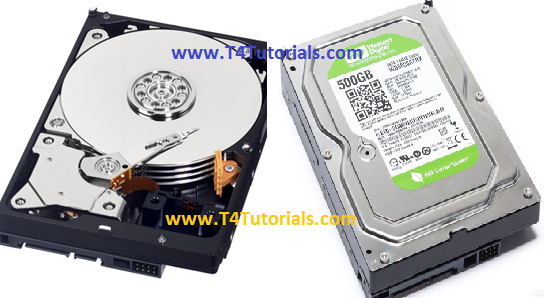 The hard disk is a non-volatile storage media.it is used to store large amounts of data on a permanent basis.

If we want to know that how hard disk store the data? To get the answer,  we need to explain the structure of a hard disk. A hard drive attached to the computer by a specific type of point of attachment or interface. The interface of hard drive must be matched with the interface of the motherboard.

A hard disk is consists of rotating platters coated with magnetic martial. It has read and wire head on per platter. The platters spin or rotate at a specific speed, arms move around the platters. The two motors, one to move the disk and another set position the head and protect the disk from dust.

The surface of each platter is divided into small regions known as domains, this used to store the number 0 or 1.

All the data is stored on sectors and tracks. Each track has many small sectors. The flow of data from hard disks is controlled by the operating system.

For performing a specific function all components work with each other. For every task of transferring data, the operating system has a File Allocation Table (FAT). The OS communicates with the disk controller through this table. The movements of the arm are controlled by a disk controller according to the instruction provided by  OS. In a hard disk, all the data read and stored magnetically.

The read and write head present on the arms used to move onto different sectors to check for required data or place for data storage.